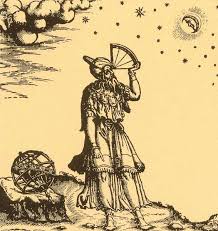 In the 1000 century the Muslims came to Europe and with them a book that would become very important for astrology. This book that was called “El libro conplido en los iudizios de las estrellas” when translated into Spanish, by one of the king Alfonsos men. This was the complete book of the mysteries of the stars, and it is probably one reason to the Spanish old tradition of astrology today. It´s impact is still visible when performing family research in Spain, noticing that all the ancestors birthtimes are recorded together with their birthdates hundreds of years back.  There´s endless stories that could be written about the interesting history of astrology in Europe, but this article will concentrate on highlighting some different methods used in karmic astrology today. For further reading on the history behind this, please check references below.

One of the important sources was the late Bruno Huber (1930-1999), Swiss astrologer and founder of the Huber School of astrology, also being the Psychological branch of astrology in Europe today. He developed a method where several charts where used as reflectors or mirrors of the actual birth chart, aiming to get a deeper understanding of the personality. The Huber Schools aim was to get to the root cause of a problem and the unconscious behaviours involved. Today there is still an active Huber School in Barcelona, and several of Huber´s books recently republished.

One of the charts especially refers to the karmic past. It´s a chart calculated based on the Moons Nodes, an is called the Nodal or the karmic chart. In this chart, a person´s past behaviour that might stem from earlier incarnations are present and compared with the birth chart. The Nodal chart shows ties in the area of the subconscious and gives information about the depts of the soul´s journey.  By comparing it to the natal chart, we might get a picture of which lessons and experiences from the past that might still affect us in this lifetime.  The chart is calculated by the Koch house system, and as seen in the example below, the signs of the charts are moving in the opposite direction compared to the Radix chart. 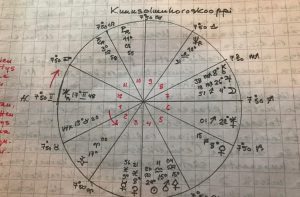 The Node chart contains the same aspect figures as the birth chart but it´s ascendant is set by the North Node in the birth chart. The Nodal chart provides a mirror of the birth chart. The planets positions show the areas of life where the soul has experiences from previous lifetimes. The houses they occupy also tells about the qualities the souls bring into this lifetime, not seldom these vary quite a bit from the placements in the birth chart. Huber´s methods are quite different from the mundane astrological and the past few years there has been a rise in the interest of them even though many also criticize his methods.

Germany has a long and genuine history of astrological interest, and a strong branch of karmic astrology. Astrologer Claude Weiss studied new moons in his book series Karmische Horoskopanalyse I and II, and then especially the connection between the prenatal New Moon and karma. Together with college Verena Bachmann they developed a method where the prenatal New Moon and the following new Moons create a system of the individual karmic journey throughout life. This system consists of four phases that are individually calculated, highlighting different developmental phases and important turning points. These phases are referred to as the New Moon cycles and each one is 29 years of length.

Based on the birth time the prenatal moon is determined and this chart is called the Karmic New Moon chart. The chart is said to give information about the energies the souls brings into this life from before birth and the timeline this chart is operating in the person´s life provides information about how long time the karmic issues will still be strongly influential. The next chart is called Family New Moon and describes the time a person is predisposed to the duties either in the childhood family or in the own family surroundings. This is a time when family centred life is still influencing the individual strongly. Usually but not always this chart is dominating until middle age, when the next turning point begins.

At the change of chart cycles a person is usually experiencing a state of turmoil or an overlapping period, that might be experienced as a turning point in life. Not seldom people remember these times very clearly and can tell about what happened during the shift period. I have noticed that clients express an especially stark feeling of change at the end period of the ending of Family New Moon cycle. Because these are significant periods, a change will be taking place over a series of months or approximately years. It´s therefore not possible to exactly determine a date for the cycle break, even if You might get a quite exact calculated date for the cycle break.

The last two charts of the Weiss and Bachmann system are associated with the persons own development. During the Individual New Moon cycle, it is finally possible for the soul to live it´s own desires and goals, dispute of others. Responsibility for the family is decreased and the time is available for fulfilment. This period then continues until the last shift to the final chart called the Transcendental New Moon. This chart tells about the last closing phase and is set without an end date, as it continues to the end of life. I have seen that this chart might have similarities with Karmic New Moon, acting as a closing phase for the cycle. For more on this please visit my talk on the Life Cycles charts with OPA.

In France Astrologer Irene Andrieu has studied and developed the Karmic astrological views in an interesting manner. During a lifetime work she has come up with the subject of Special Karmic aspects referred to as a person having a specific karmic mission. According to Andrieu a special karma means that the soul has made an agreement to complete certain areas or lessons, maybe highlighting some karmic issues during this lifetime. Her views are based on the free will of the soul to choose or to neglect certain karmic issues. These karmas include more or less of challenges and will therefore also highlight certain themes in the birth chart.

There are several different methods of determining these special karmas, which are rarely found in a chart. The special karmas need to be calculated by hand. Andrieu also stresses the importance of acknowledging the Moons Nodes and their rulers, together with the elements they are placed in. She views the house of the Nodes as more important than the sign placement, because of it´s individuality in the Placidus house system. The house is seen as the area of life where the native should express the karmic energy passed towards the north node. The elements are interpreted as a form of wholeness, leading to a synthesis of the Nodes. Andrieu further connects these Nodal placements to the Hinduism caste systems and their spiritual meanings.

This other system expresses the importance of the Nodes ruling planets and the aspects they might form with another. By looking at the Node rulers You might find that they are making certain aspects to each other. This might also give information about a person´s special karmic issues. To give an example, Your Neptune might be the ruler of the North Node in the chart, and Mercury might be the ruler of the South Node. On further investigation You notice that they are making a conjunction to one another. This aspect between the Node rulers will then be a sign of a special karmic issue that is to be solved in this lifetime. Andrieu provides in her works detail information about these different kinds of karmas connected by different aspects in the chart. 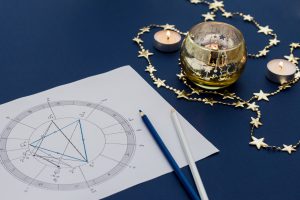 The missing parts in the chart has also been a subject for karmic astrology studies and an astrologer that has contributed to this field is English astrologer Janis Huntley. Huntley´s view on unaspected planets is interesting as she thinks they are karmic gifts, lessons already learned in one or previous lives. It is though according to her possible to fall back into the traps of the planet, misusing it´s power or loosing control in the areas concerned. If a person manages to use the energies wisely a planet without aspects might be a blessing and a strength, representing an old wise soul that has something to share with the surrounding world. These unintegrated planets are also quite rare, in a study by Huntley of 400 birth charts only 13 had an unaspected Sun, and 7 an unaspected moon. To determine if a planet is unaspected, it cannot make more then one aspect within an orb of 3 degrees.

When elements are concerned missing, they might be overcompensated in the chart. This is something that´s commonly said to be the case. But Huntley doesn´t fully buy this theory. She thinks that people might be unaware of the missing element and that would make it very hard or even impossible for a person to express that quality in any way.  If this is due to a karmic issue, examining the sign of the north Node might give further information. If it´s placed in the same missing element, there´s maybe a deeper karmic issue behind.

It´s maybe not a surprise that Hitler had a lack of water in his chart or Bill Gates a lack of earth. Hitler didn´t cope well with the feeling nature when Gates certainly did with the wealth of earth. This might speak for that some people being able to handle a void when others do not.

There´s many forms of karma and reasons for incarnating presented. We often view Soul connection merely as something unproblematic and divine and might forget that when karmas are concerned there´s also usually some work to be done.

Judy Hall, an English astrologer has studied the different forms of karmic relationships and to mention a few, in relationship karmas there might be quite issues around;  dependence, duty, love and hate, guilt, specific tasks, attitudes or revenge. Hall describes the different karmic connection in detail in her book Karmic Connections. She places interested in understanding why a specific soul chooses a specific chart, as she believes every chart is fitted for every soul.

This might also be something to look out for when we fall head over heals for someone. A karmic relationship is here defined as a fast and immediate attraction that might not fit the social standards. Or an instant attraction that can´t be ignored. A certain lesson to be learned?

Starting in Spain and working through different European countries karmic astrology is seen to have been developed into some specialized systems and niches in different schools. Rather that working against each other they might make a great completion.

In my own work using several systems I´ve noticed that clients seeking advice from karmic astrology many times has some karmic issues or special karmas found in their charts, as if they already knew that karmic astrology could somehow provide a deeper answer to their questions. And maybe that is possible. It´s still quite rare to see special karmas in charts, and every time as thrilling to examine a new one!

I´m a Finnish based astrologer that hold a Diploma from the MISPA school of Astrology. I currently lecture on Karmic astrology at the new Finnish educational astrological programme: Journey of the Soul Ltd