As the Sun travels into this Earth sign 21st of December we celebrate Winter Solstice in the northern hemisphere, and Summer in the Southern Hemisphere. In the northern hemisphere where I live, it means we are finally getting our Sun back following the longest and darkest period of the year. The ancient Germanic peoples celebrated this time that they called Yule, a time when the Sun finally made its return. As Christianity evolved these two holidays were intertwined into what we today celebrate as Christmas. (5) The birth of Christ (the Sun) is celebrated 3 days after the Solstice, because it takes 3 days for the Sun to begin moving back north.

Capricorn is the last earth sign of the zodiac, known for representing tremendous strength and determination. This sign is sometimes metaphorically described in the imagery of a goat climbing a mountain, steadily until it reaches the top. The fruit of these efforts and achievements give us authority and credibility, to be able to guide and evaluate what works from what doesn’t. With a new year coming, we are invited to look back and evaluate our achievements as well as aiming for future possibilities.

When the Sun is travelling through the sign of Capricorn, we have the opportunity to make more out of our lessons and implement them – turning ideas into concrete actions.

The Capricorn ingress chart gives us clues about the next season: With the Moon in Cancer opposing Venus and Pluto in Capricorn, we may identify some stresses, perhaps as a result of the pandemic limiting our mobility outside our home.

We can aim at new year resolutions to time set the strategies for making it to success. Which new opportunities can you see yourself grab onto 2022?

The last time these planets met in a square aspect was during the years 1999-2000 when they were in opposite signs (Saturn in Taurus and Uranus in Aquarius) At the time we experienced significant changed, for example, through the European Union where the Euro currency (taurus) began circulating.

Where Uranus asks us for change, Saturn is tightening its grip. In the course of 2021, many people have perceived covid measures and vaccinations as a limitation of their freedom, confronting the scientific establishments, while others felt that vaccination measures were not rigorous enough – This is a typical expression of this square.

Additionally, the continual rise of crypto-currency also signify changes still in process for our economic systems.

Since Dec 19, the Goddess of love and pleasure has been retrograding in Capricorn. Venus retrograde periods invites us to take a closer look at the meaning of our deeper values, especially those playing out in our close relationships. These retrograde periods were observed thousands of years ago, by the the Aztec and Maya cultures, and seen as a time when this ancient war Goddess made a total makeover. Venus is the least common retrograde of all planets, retrograding every 18 months for a period of 6 weeks. As she gets within 10 degrees of the Sun, she is not visible anymore in the evening sky, and goes invisible for 10 days or so, to then reappear in the morning.

She was interpreting as travelling from the feminine principle when an evening star, to becoming masculine when turning a morning star..

Venus retrograde periods are sometimes viewed as time when we need to revisit our deepest desires, symbolically this time might be seen as a time of testing, to better discriminate between what´s important in our lives and what can be left out. Issues and people from the past reappear.

The last time this happened in the sign of Capricorn was eight years ago, (Dec 22, 2013 to Feb 2, 2014) It might be interesting to look back at what was going on in your life back then, as this might shed some light on the upcoming themes. (2)

When Venus is retrograding, we might not be able to see our relationship for what it really is until the retrograde period is over. It can be a time with many questions and doubts, but clarify returns when the planet goes direct again. Personal retrograde planets are often associated with a strong need for introspection as the planet energy is turned inward, giving it a more psychological nature. (6) No wonder many astrologers and people interested in spiritual development have such placements in their birth charts. One example can be that of astrologer and theosophy Alan Leo, who was born with no less than all tree personal planets (Venus, Mercury and Mars) retrograding at birth. 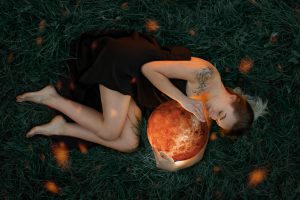 On Christmas Eve Dec 24, Venus in retrograde motion comes to conjunct Pluto at 25 Capricorn. Venus, representing material assets, might bring stronger focus on materialistic values when conjunct Pluto. Pluto reveals hidden truths and represents the need to re-empower ourselves. Issues around personal power and attitude towards wealth might undergo a transformation. The area of your chart where you find 25 degrees of Capricorn might tell you about the area of life where this change will take place. (6)

As we revisit our past, Venus retrograde may be a great time to check out flea markets and bring new value to old possessions. You might find the thing you exactly need there!

Jupiter has been in the Air sign Aquarius for most of the last year and we can now welcome its entrance into the Piscean realm. During 2021, we have had the joy of witnessing the growth of the astrological community and the new forms of cooperation that have been established. With an increasing importance put on ethics and morals for astrology practice, we now have now the IAEA, a new organization for Ethics in astrology! Jupiter now enters Pisces, the sign it traditionally rules, a combination that dissolves boundaries and opens new horizons. If we are not careful, this might create confusion and difficulty finding a clear direction.. In a positive way, Jupiter in Pisces may inspire us to seek new meanings and find new inspiration.

As it enters Pisces, Jupiter is squaring the nodes at 0 degrees Sagittarius/Gemini, giving us the possibility to integrate the past and the future in a fruitful way. We cannot move forward without considering what we still have to work on. While we experience limitations in our lives, Jupiter in Pisces inspires us to find new freedoms and overcome obstacles. This is a time to make future dreams come true. (6)

Another big energy shift this time is the transition of the Moon’s Nodal Axis into the signs of Taurus (North) and Scorpio (South). This means that during the next 18 months, eclipses will take place in this axis. The last time the Nodes were in these signs was back in 2003-2004. (1) During this time there were important economic and resource management reforms taking place, as the Euro was stabilizing as a currency and news on possible abrupt climate change was highlighted by scientists (3). We also had the SARS outbreak that virus was identified in the beginning of 2003 (4), and the tsunami disaster in December 26, 2004, as well as breakthroughs in studying and identifying the human genes (Human Genome Project 2003).

The North Node can be interpreted as the needle of a compass pointing us towards the direction we are aiming for. This might therefore be a time when we need to figure out how to stabilize the economy after the pandemic and how to manage the earth’s resources, stressing the importance and awareness of the ongoing climate change. We might also want to look outside the box for new technology and solutions to our problems as Uranus is in Taurus.

Karmic astrologer Martin Shulman (7) thought that this Nodal Axis placement was one of the strongest and also one of the most difficult, because of the transformation of Scorpio into Taurus. The South Node in Scorpio is drawn to emotional intensity and instability, but the lesson is to find peace and harmony through the North Node in Taurus. It might therefore be important to learn forgive and forget, to see things for what they are and not hold grudges of the past. We might also want to examine all the possibilities for building something new and stable after a time when many of our society’s vulnerabilities and unreliable systems have been exposed.

This transit is especially prominent for those with planetary placements in these signs, as the Nodes will activate these planets during the transit. Nodal axis transits are interpreted as developmental phases that can feel fated.

On January 25th Mars is joining Venus, Mercury, and Pluto in Capricorn. This cluster shows a need for strong determination and rigor in our actions. Mythologically, Mars is considered aggressive and often a troublemaker, causing quarrels wherever he went. With Mars in Capricorn, there may be confrontations with authority figures or competition in our career arena. Positively, it fosters our ambition, and so we may find ourselves “getting down to business” and actually enjoying it. (1) Mars is traditionally considered exalted in this sign, meaning that Mars qualities are emphasized.

A truly unique conjunction between Mars, Venus and Pluto brings tremendous intensity in the beginning of March 2022. (2) This powerful energy will occur in close proximity to the New Moon @ 12 degrees Pisces. Most planets around this time are in introverted signs (Earth and Water), emphasizing a strong need to process things within.

Venus and Mars are associated with relationships, sexuality, and also with the economy. In combination with the New Moon, we may expect significant new changes and decisions in these matters. Following the Venus Retrograde phase, perhaps many people will feel the need to make changes in their relationships or in financial matters.

While the New Moon with Jupiter can bring new inspiration and faith, looking at the brighter side of things, Mars/Venus/Pluto represent an uncompromising approach. Ideally, this energy will help us implement our ideals in practical ways.

This New Moon in Aquarius lands very close to the infamous Saturn/Uranus square. This will highlight the importance of socio-economic changes. Aquarius brings awareness about social justice and liberation. Saturn and Uranus represent a battle between the old and the new, the traditional and the modern. As the New Moon activates this square, we may be put into situations where we must find balance between the two.

Maybe this is a time to challenge yourself to do something that you don’t usually do, such as signing up for a new hobby? Or call a friend you haven’t heard from in a while. Finding excitement in the simple things might do the trick.

Anne Sundell is is a Finnish based astrologer, writer, and OPA’s Finnish Satellite. She´s head lecturer and founder of the Finnish Astrological Education programme: Journey of The Soul Ltd – Education for Karmic and Esoteric Astrology