The history of Astrology in the northern countries, can really be found in its absence. It has barely been researched.

To be able to understand the history of Scandinavia it´s important to go back to the epics. A National epic is a written work that captures the essential or spirit of a country. They usually also describe a nations specific cultural beliefs in old time. People living in Norway, Sweden, Denmark, Iceland or Finland had a strong belief in their own nature Gods, such as Tor, Odin and Freja, or as in Finland in Ahti, Ilmari or Tapio. The national epics such as the Icelandic Sagas, Eriksgatan, Eddan, or Kalevala, contain information about how watching the stars has been a quite natural part of life, especially concerning health matters and foresights.

However it seems to me that Astrology followed the other streams of philosophies, such as the neoplationism, the church, and the reformation, and therefore reached Scandinavia as it´s last stop in Europe. However records tell something different…

Around 1342, the Plague reached the coastline of Norway, and spread across the country killing approximately 1/3 of the population. When studying the notes of this time, there´s suddenly an interesting quote about an unfortunate placement in the heavens leading to this disaster, more specifically that the conjunction of the planets Mars, Saturn, and Jupiter in Aquarius on the 24th of March 1345 was the reason for this outbreak. Accompanied by a fateful Lunar eclipse on March 18. We realize that astrology was well practiced, even though a Swedish  law forbode it around the 1300´s. Olaus Magnus (1490-1557), a Swedish writer in the 1400 tells us about the ancient folkgods of Sweden and mentions that there were also temple places worshipping Ceres (the Good mother) and Diana. How exactly these were connected to astrology remains unclear. 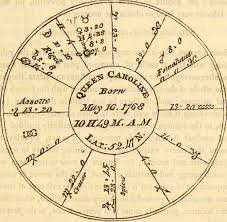 Challenging the belief that astrology came to the North European countries via the renaissance, we need to consider the ancient nordic alphabet, the Runes. This is our nordic answer to ancient text, and it has been researched for hundreds of years. This alphabet consists of 24 letters divided by the four seasons exactly on the time of Solstice. The format of the Runes consists of a wheel pattern (see picture).

The more recent version of the Rune alphabet has 12 major signs, and even though it’s not an exact copy of the zodiac, the similarities can be noted. In the ancient nordic text Eddan we can also find a type of zodiac system. Eddan is a collection of texts that has been written in parts of Norway and Iceland between 800-1000.

It might be that, as the Danish astrologer Claus Houlberg said,  that the art we today call astrology came to the north with the Renaissance, and yet, there were already several practices and signs in the national Epics and other old texts, pointing to an established knowledge and interest in the interpretation of star patterns.

Little is written about the astrological practices in Finland during middle ages since it was a part of Sweden. Without its own written language far into the 1800 century all folklores was oral until written down as a part of the National Romantic era before the Russian revolution.

The Finnish ancient Gods Ahti (water), Ilmarinen (air), Tapio (forest), Lohiatar (goddess of death) shows similarities with the other nordic God figures: Tor, Oden, Freja. The Finnish people lived the longest in relative isolation from the influence of Scandinavia due to their diverse language.

Mikael Agricola, a Finnish bishop and reformer who studied for Luther, wrote the first Finnish book in 1543. He also showed interest in culture and collected it in texts that also contained astrological references. Even as a man of God his prayer book was illustrated with an astrological calendar. The oldest texts are only available in Swedish or Latin as Finland was a part of Sweden until 1809. Notwithstanding, Finland was known for having an important astronomer and astrologer named Forsius. Sigrid Forsius had a surely extraordinary turbulent life.

While studying in Germany he published the first Almanac containing Prognosticum Astrologicum that led him into conflicts with both the church and the contemporary researchers. He was also said to have a bit of a temper and was often involved in conflicts. After standing trail he was sentenced to jail in Sweden. Then he published Great Prognostication in 1617, that contained the basic knowledge of how changes on Earth are influenced by the heavenly bodies. Parts of his writings was also included in the Farmers Almanac that widely spread through Scandinavia.

Forsius was during his lifetime, two times granted a professorship at the University of Uppsala in Sweden. In between, he was jailed two times, went to Lappland on exploration trips, wrote a lot of texts and books on physics, almanacks, and different astrological forecasts. He was seen laying on the cold ground for hours and hours with a book on top, just staring at the sky… coming across as somewhat an odd character. His writings were highly recognized in several countries, and also got many reactions. 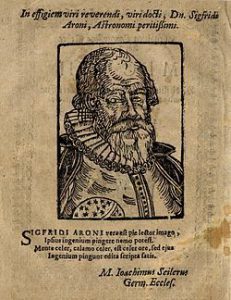 After a disputation in Sweden 1617 called Ethica Christiane, astrology was seen as Magica Illicita (forbidden magic) and the art got critics that was directly given to king Gustav II, and the climate changed. Another professor Stenius simultaneously published “The tract Against Astrology” and Forsius was no longer in favour of the king. This led to a hunt on astrology, (even though Sweden was a relatively friendlier zone in this regard than Great Britain at that time). Accusations of devil worshipping led to persecution, peaking in Sweden and Finland in the middle 1600, this as a reaction on the book Hammer for Witches – Malleus Maleficarum (1487). Forsius was expelled from Uppsala University and went back to southern Finland where he spent the rest of his life as a priest. He has a small star named after himself.

Sweden had a publication called Eriksgatan that may compare to the Finnish national Epic Kalevala. This was a story of the King Magnus Erikssons’s life and adventures (1335), but it also contains other important information about peoples (kings) lives at that time, and their interest of the stars and especially the Moon’s position. An anonymous Swedish writer already comments on astrology in the early 1400 century, long before astrological texts had arrived.and been translated from German.

Another important book published in 1508 was influential in Swedish, a sort of almanack that was used by farmers. The book was called ”Bondepraktikan” and was released in Germany and translated into Swedish, reaching the country by the 1600. This book was widely used as a daily tool for living according to the sky and the planetary positions. This book is actually still in print and is one of the first books I read as a child containing astrology.

For a few hundred years, from the 18th to 19th century, astrology was operated underground in Sweden. It was practiced in closed groups, in subcultures or secret orders. Sweden published its first book on astrology “Stjernornas Profetior” in the year 1872.

The Danish Astrologer Claus Houlberg dates the astrology coming to Denmark during the late 14th century (see source below), as a part of the beginning Renaissance. At the same time he states that there wasn’t not much information about this subject in history. A lot of knowledge naturally passed from Germany to Denmark. Tycko Brahe was a world known noble Danish astronomer and astrologer who had a significant influence through his establishment of the first observatory on the Island of Hven about 1576. It was called Uraniaborg and contained instruments for observations that Brahe developed. Unfortunately, nothing remains of the building today.

This began with him receiving a request from the emperor of Prag to list the most unlucky days of the year, so the emperor would be prepared. These were later included in the almanack for farmers ”Bondepraktikan” to look out for. There were 33 unlucky days of the year, most of them usually being in January. In 1572 a new star was seen in the sky, and this made people very interested yet afraid of what it could mean. It engendered theories about the apocalypse or a terrible disease. Brahe also studied this star and his first published article was about this star, to which he however, did not have an explanation. Later, in his De nova Stella, he follows the supernova known as Kepler’s supernova that was visible for almost a year 1604-05. Brahe is without a doubt the most famous astrologer in the history of the northern countries.

Norway was fortunate to be connected to the folklores of Iceland, adding a lot of interesting material through the national epos Eddan as well as the Havamal, Heimskringla, or the Icelandic Sagas. Norway was during the 1300’s also a part of Sweden, and with having a large coast, the seafarers where usually familiar with the stars in the sky that were used as navigation tools. There’s no doubt that these influences also had an important impact on the Swedish’s historical development. Astrology is mentioned in folklore and can be seen through sagas and tales. Norway was the country to be the first exposed to the plague in 1349 to which the unfortunate star constellation was referred to. And as in the countries above, astrology was a means to help in times of sickness and crisis, with knowledge preceding the renaissance. In the almanacs of this time, a picture called “The astrology of the anatomic man” showed which parts of the body was ruled by which starsign.

Author Gina Dahl states that there were definitly an interest in astrology in Norway in the middle ages, but the lack of an organized academic society, the traces of the oldest forms of astrological interest can only be found in literature concerning omens, predictions based on the art and the heavenly bodies effects on the people. There is evidence of a strong interest especially in the Moon´s travel through the zodiac. However no calculated horoscopes are preserved from this time. In Denmark we know that there were astrological discussions going on already in the 1200 century.The first full text defending astrology in Norway was published in 1583 by Jens Nilsson, Epideigma. In this book he states that there are 1022 fixed stars. And also describes conjunctions between planets to cause storms and climate changes…

Astrology was challenged in the North European countries, sometimes being venerated and other times banned. Today, all of the Nordic countries have their own astrological communities: Finland has two astrological organizations (oldest one in Scandinavia still active founded 1962) and a newspaper Astrologos, Sweden has an active growing community and their first community was founded in 1910! Denmark has organizations as well as newspaper and the worlds first astrological museum, and Norway with a state-funded fully operational astrological educational system!

So astrology made it through it´s rocky history, or maybe the Scandinavians just took their medieval Queen Christinas advice: “You better know your astrology and medicine, so that they can´t fool you”.

Anne Sundell is a Finnish astrologer. She holds a Masters Degree in Developmental Psychology and a Diploma from the Mercury Internet School of Psychological Astrology (MISPA). Right know she´s specializing in Relationship Astrology.  She´s also a published author and lecturer.

Martin Kjellgren, Timing The Prophets – Astrology, Orthodoxy and the World of God in Early Modern Sweden (2015)